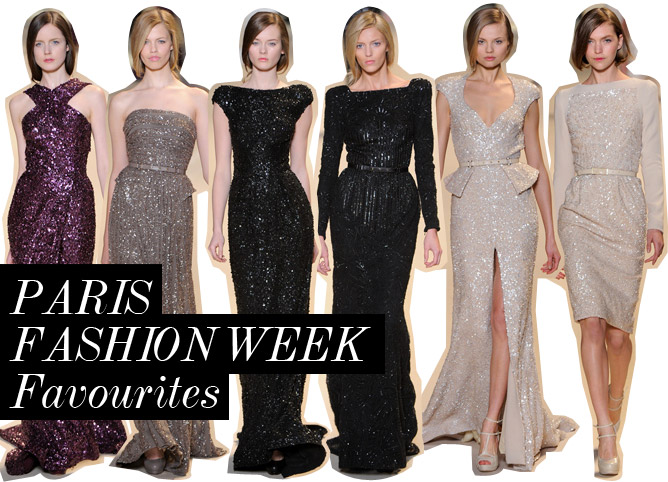 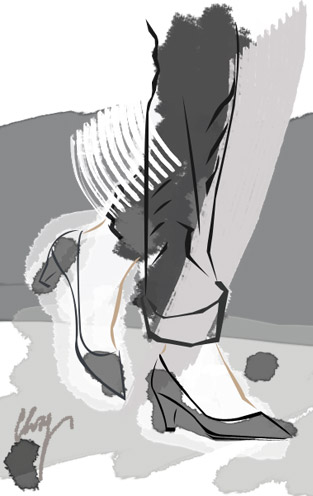 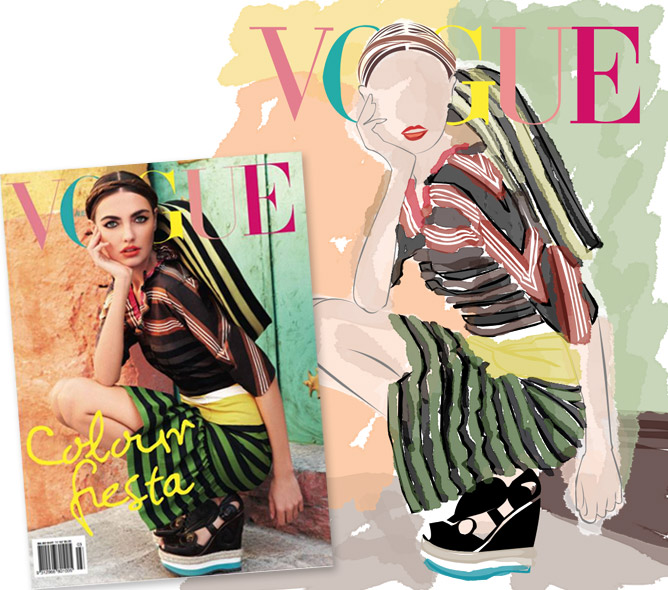 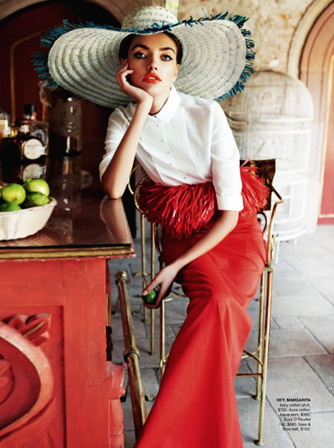 ‘Viva La Revolucion’ is a feast for the eyes of some of the most exquisite looks from the Spring / Summer 2011 collections.

Today I brought the March issue of Vogue Australia and instantly fell in love with the feature editorial – ‘Viva La Revolucion’.  And that cover! This gorgeous cover is one of my favourite Vogue Australia covers of all time! I love the model; the pose; the use of colour; and how there are no words advertising the contents – just the bold image and ‘Vogue’ title. So strikingly beautiful!

Featuring Alina Baikova, the editorial was shot on location in Mexico by Nicole Bentley. With looks from Prada, Stella McCartney, Gucci, Giambattista Valli, Bally and Mulberry; ‘Viva La Revolucion’ is a celebration of intoxicating colour.

Be inspired for next season with bold colour blocking, mixed prints and some darling hats…. 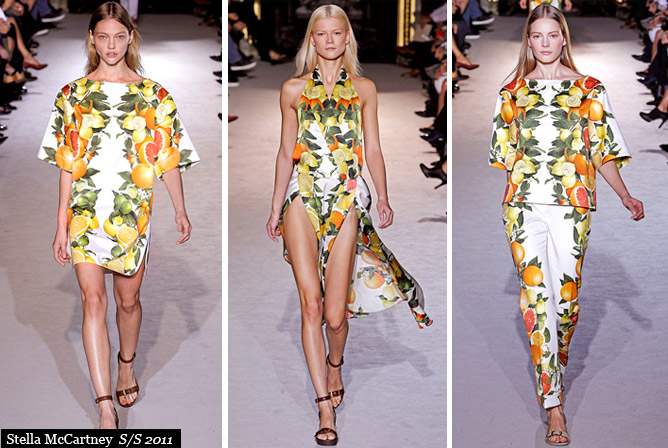 Brighten up your wardrobe with colourful fruity looks inspired by the Spring / Summer 2011 collections. 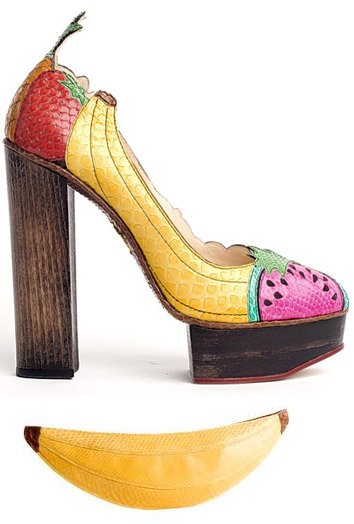 Between Prada, Stella McCartney and Moschino Cheap & Chic, designers were feeling for a Summer health kick. There were Banana prints on the Prada runway, while Miuccia Prada herself wore banana earrings backstage. Of her colourful collection, Miuccia Prada said: “I’m tired of minimalism.”

Meanwhile, at Stella McCartney, models looked fresh, vibrant and citrusy in luscious lemon and orange prints. At Moschino Cheap & Chic, a divine lemon print 50’s inspired skirt teamed with a matching top and waisted belt, made my heart stop! So divine! Other fruits that took to the runway included; apples at Miu Miu and cherries at Anna Sui, while at Blumarine models carried lemon handbags.

However, dressing in fruit can be daring. If you would prefer to ‘taste test’ this fruity trend, check out Charlotte Olympia’s banana clutch bag or mixed fruit platform heels (pictured right). The striking heels are decorated with interlaced pineapples, bananas, strawberries and watermelons. It is the perfect way to incorporate the trend into your everyday style with effortless flair.  Of her pieces, Charlotte Dellal, the designer behind the Charlotte Olympia label, says; “They are tongue in cheek but wearable, I like accessories which have a sense of humour.” 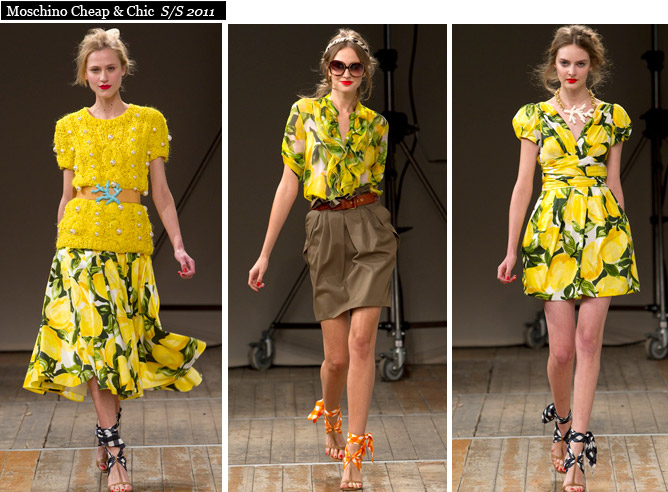 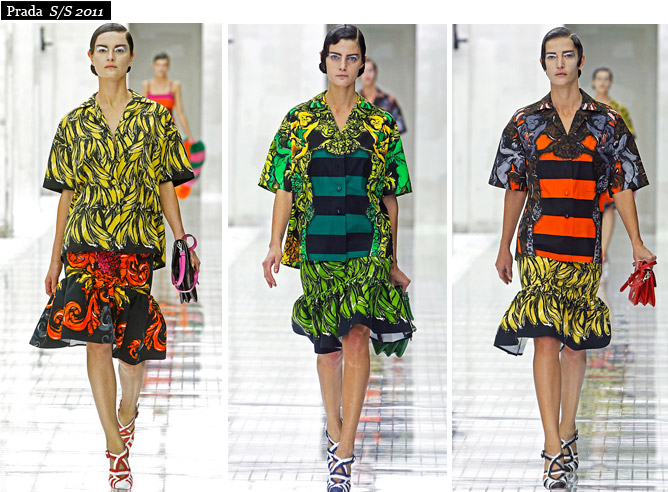 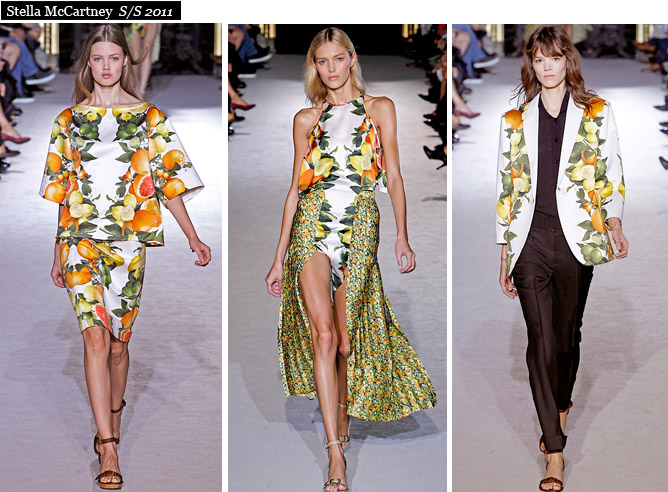 So be daring in citrus! Make a colourful, fresh statement. You can now eat your fruit and wear it too! xx

All photos from style.com