It was a collection that exposed the beautiful workings of Haute Couture. Sheer layers showed the delicate construction of under garments. Tulle billowed elegantly from grand ball gowns. Ladylike elegance and polished glamour, made for sensational extravagance. 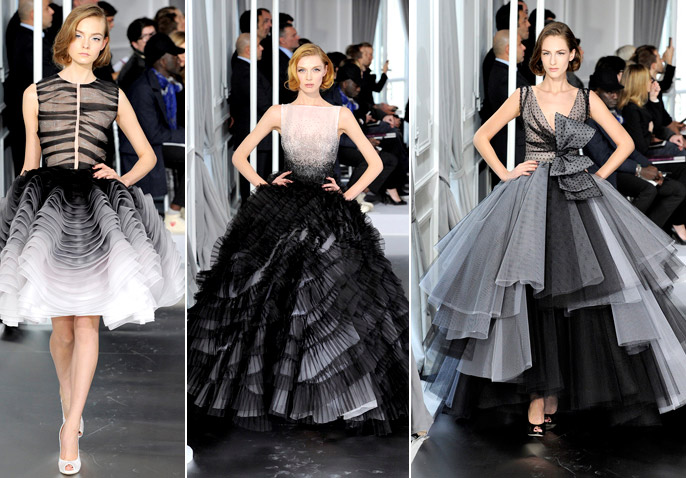 What did you think of the Dior Haute Couture Collection? xx

To achieve the look, start with a flawless complexion and a dusting of bronzing power underneath the cheekbones for added definition. Yellow and golden eye shadow tones are then applied around the rim of the lids, brow bone and in the crease. The inner rims of the eyes are lined with fresh toned pencil, before the look is finished off with a rich copper-berry shade on the lips.

The Rodarte make-up and texturised tresses are prefect for a glowing Summer look.

The first cover of Kim Kardashian on her Wedding Day has been released. The People’s Magazine cover shows a good glimpse of one of the magnificent Vera Wang gowns she wore on her big day.

It’s been reported that just two days before the wedding Kim hadn’t decided which one of the dresses she was going to wear for her big “I do” moment. Of her chosen gown, Vera Wang said: “It was Cinderella. But Cinderella with a very sexy body. She has a very Liz Taylor or Sophia Loren kind of body and we didn’t want to lose that.” Kim later changed into her two other gowns for the festivities (see sketches below).

Lady Gaga and her little sister, Natali Germanotta, are believed to be creating a fashion line.

The line will reportedly be “relatively normal and wearable”, with the pair intending to remodel iconic dresses from the past but with a twist – think of Marilyn Monroe’s white dress but created rubber… interesting!

The rumour mill is still in overdrive with reports indicating Marc Jacobs will move to the helm of Christian Dior, while Phoebe Philo will take on his position at Louis Vuitton.

Now Marc Jacobs president, Robert Duffy, has added fuel to the fire by commenting, “[Marc] could do a couture line”. Meanwhile, no shortlist has been revealed by Dior and no date has yet been set for an announcement of who will take over as Creative Director.