Step Out Of The Shade… 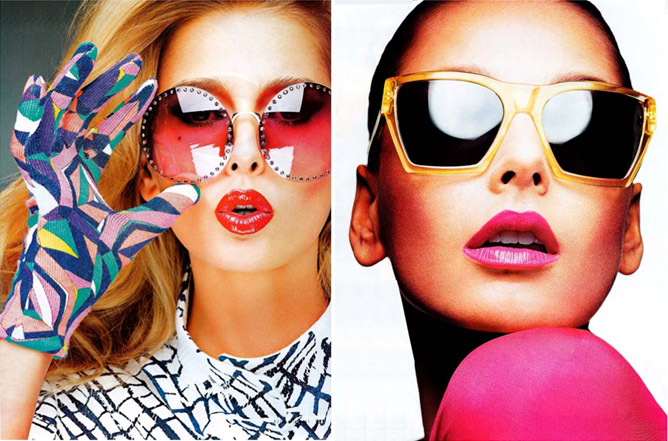 Be bold… Make an Unforgettable Statement In Some Spectacular Shades

Entitled ‘Eye On You’, Elle Italia introduces some seriously chic sunglasses from the Spring / Summer 2011 runways

Are you lusting after some delightfully delicious shades? xx

Celebrate Friday with some delicious scoops of Fashion News…

The first look from the Lanvin for H&M collaboration was released just the other day and now the second image has surfaced (pictured above). In gorgeous floral prints and delicious shades, these dresses are simply darling! I know which dress I will be after on November 23rd – Natasha Poly’s pink floral frock!

Jimmy Choo has created a special capsule collection with Ugg Australia. Striving to capture the best of both brands – the comfort of Ugg and the spirit of Jimmy Choo – the limited edition collection turns the functional Ugg boots into works of art. Meanwhile this week, Jimmy Choo President and Co-Founder, Tamara Mellon, received an OBE for her services to the Fashion industry.

What better way to advertise her new range of sunglasses then by modelling them on her gorgeous husband, Mr. David Beckham? Well there is no better way! Mr. Beckham wears the Classic Aviator in the ‘Sky’ colourway. Mrs. Beckham also urged her followers to sign-up now for a pair from her new collection, tweeting: ‘Get on the waiting list at Harvey Nicks! New #victoriaBeckham glasses drop at the end of Nov!’

The Calvin Klein Jeans Campaign, starring Lara Stone, has been banned in Australia. The photographic and video content was deemed inappropriate – glamorising gang rape and violence towards women. What do you think of the Campaign? Do you find it inappropriate or High-Fashion Edge?

If you are like me and the idea of doing laundry leaves you cold, then take some inspiration from the stunning Lily Donaldson, Gemma Ward and Caroline Trentini. Taken by Steven Meisel and originally published in Vogue US December 2005 issue, these shots turn the seemingly mundane task of washing into a ball gown affair…xx