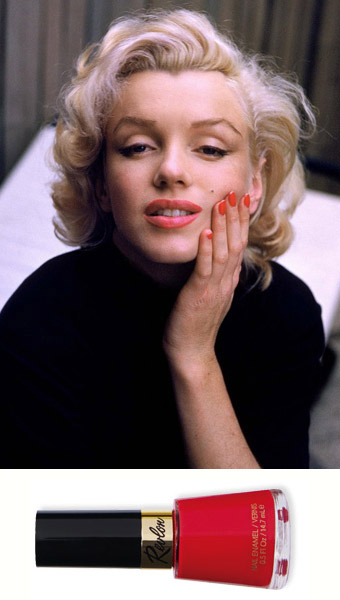 Irresistibly alluring, this classic power colour is a beauty icon. One of the greatest selling cosmetic items of all time, red nail polish is bold, daring and powerful. Associated with dazzling beauties and glamorous leading ladies, such as Marilyn Monroe and Rita Hayworth, red varnish is seductive, dramatic and has the power stop traffic.

Nail polish as we now know it was first created in the 1920’s by the Charles Revson Company (now Revlon). Previously nails were stained with colour; however, working with new technology used for painting cars, nails could be painted with hard-wearing enamel over the top instead. The first Revlon nail polish went on sale in 1932. It initially sold in hair and beauty salons, and was then marketed in department stores and pharmacies.

But it was Hollywood that really gave nail polish its popular appeal. With the arrival of colour movies, audiences could see their favourite actresses wearing alluring red shades. It was the fashion to match your nails to your lips, so luscious red and pink shades were virtually all that was available. Painting your nails was also a relatively inexpensive way to exude some of that ‘Hollywood glamour’.

To this day the formula has remained virtually the same – with just a few tweaks and changes to make it last longer and dry quicker. Red is still in fashion and can still give instant ‘Old Hollywood Glamour’ and striking appeal…

Which is your favourite nail polish shade?