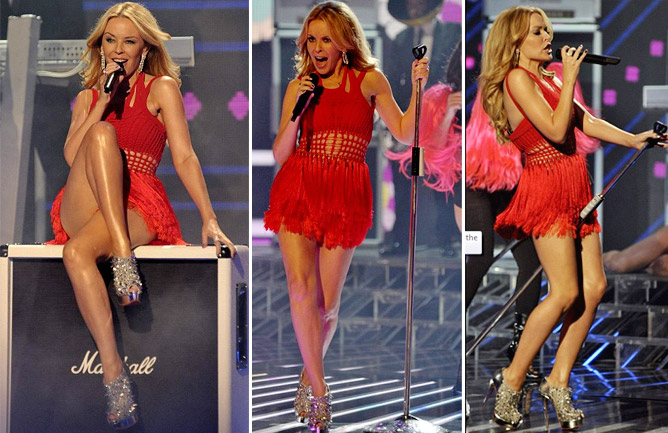 4 Shots of Espresso News for your Monday….

Kylie Minogue is the epitome of the word Super Star. Taking to the stage on The X Factor last night, Minogue wore a striking red Mark Fast dress and some unbelievably divine Christian Louboutin sparkly heels. Singing her new track ‘Better Than Today’, Minogue did look better than ever!

Last week Condé Nast released the iPad December issue of Vogue UK. Of the app, Nicholas Coleridge, the managing director of the group’s British sector said: “The Vogue app uses a specially created platform, conceived to allow fashion photography and shoots to come to life, to allow the fashion magazine to offer a multi- sensory experience.”. I cannot wait to see it!

London model Amber Le Bon, 21, is the new face of American High Street brand Forever 21. Forever 21 has two stores set to open in the UK; the first in Birmingham on November 12th and another in Dublin on the 13th. Le Bon showed the Forever 21 collection in London recently and looked perfect for the role. Amber Le Bon is the daughter of Duran Duran lead singer, Simon Le Bon, and iconic model, Yasmin Le Bon.

We are used to seeing David Beckham in his underwear campaigns for Armani; however, rumours are circulating that he may be starting his own range. Reports claim Beckham is planning to launch his own line of underwear once he has retired from football. It is also believed that he wants his wife, the exquisite Victoria Beckham, to be equally involved in the project. We will just have to watch this space…