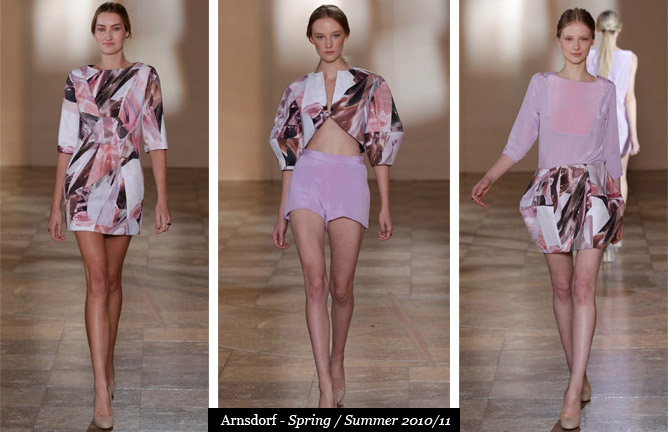 Melbourne Spring Fashion Week was held this week and a series of Designer Runway shows highlighted the fresh, light and elegant essentials for Spring / Summer down under.

One of my favourites – Arnsdorf ’s “Opticks” collection (originally presented at the Museum of Contemporary Art, Sydney, in May), focused on the idea of “reflection, refractions, inflections and colours of light”.  The collection was chic, feminine and sharp yet utterly ethereal.

The clothes all had strong geometric shapes to create flattering effects on the female figure. Featuring a mix of light neutral colours (from nudes, caramel and lilac) followed by strong rich shades (coffee browns to brick red); the collection’s final looks went onto to show a spectacular kaleidoscope of prints. The spectacular shattered-glass prints were the result of a collaboration with graphics and print designer Roanne Adams.

Arnsdorf is receiving international acclaim as one of the best young Australian brands. Focused on exploring narrative through her designs, Arnsdorf pieces lead audiences through a playful journey of the collection’s story / theme.

Created by designer Jade Sarita Arnott, Arnsdorf made its debut in 2007. Arnsdorf is stocked in premium boutique stores around Australia, New Zealand, North America and Europe. 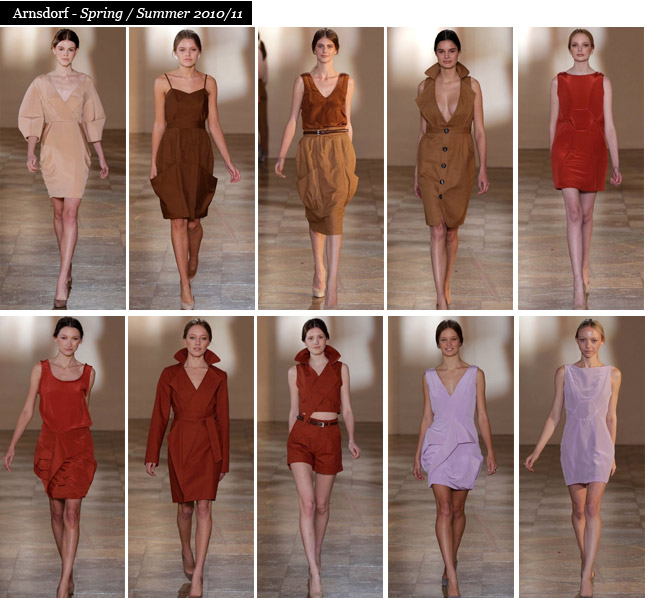 Please follow the jump for Uptown Espresso Shots of News…

EVERYONE IS TALKING ABOUT…

Lanvin collaboration with H&M
The Lanvin and H&M collaboration is massive news this week! H&M confirmed it will be collaborating with Lanvin for a collection of both men’s and women’s wear that will launch Nov. 20th in North America and Nov. 23rd worldwide. Reportedly the womenswear collection will encompass 30 garments and 15 accessories, while the menswear will include 25 garments and about 10 accessories. The collection was designed by Alber Elbaz and Lanvin menswear designer Lucas Ossendrijver.  I cannot wait!

1>| Instead of waiting months for pieces from the collections to be in stores – Burberry customers will again be able to purchase select pieces online straight after the Prorsum show on Sept. 21 during London Fashion Week. Last season Burberry was also the first brand to livestream its show in 3D…

2>| At the Elizabeth and James Pop-Up shop during New York’s Fashion Night Out, Mary-Kate and Ashley Olsen will be ringing up customers’ purchases from 7 – 8pm…

3>| Miranda Kerr and her adorable puppy have gone 3D on the cover of Vogue Italia! The beautiful cover and inside spreads even require the old-school 3D glasses to achieve the full effect…

5>| Kate Moss’ 14th and final full collection for Topshop will be in stores October 25th. From now on she will only be creating a series of smaller capsule collections each year…

6>| Lacoste has named their new head designer – Felipe Oliveira Baptista. He will take over from Christophe Lemaire who will himself be stepping into Jean Paul Gaultier’s shoes at Hermès…

The 2010 British Fashion Award nominees are:

What is your exciting fashion or style news this week…x