Featuring Anja Rubik, for the third consecutive season, the photos were taken inside an artist’s studio and were lensed by Karl Lagerfeld.

When first presented during Milan Fashion Week earlier this year, Karl Lagerfeld and Silvia Venturini Fendi described their collection’s muse as a “buttoned-up-to-the-neck art teacher who was still wild enough to wipe her paintbrushes in her hair and unleash the animal within.”  The collection featured fussy-free femininity with pieces both chic and effortlessly wearable. Practical pieces in sturdy fabrics created a textured, luxe simplicity.  Structured silhouettes were teamed with oversized coats; while ribbed wool stockings in shades of mustard, teal and brick red, brightened the runway and were worn with sweet, chunky Mary Jane heels.

Electric, refined, preppy and mysteriously alluring – love this collection and the campaign!

For those in the Northern Hemisphere; do you know which Fall essentials will you be adding to your Autumn / Winter wardrobe? xx 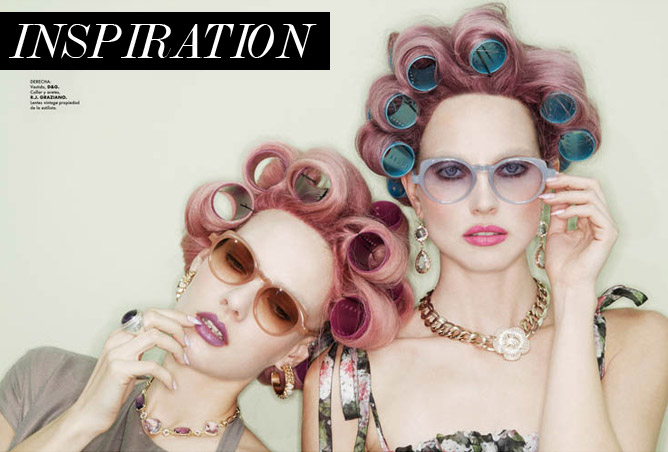 My Tuesday Inspiration came in the form of a beauty editorial for Elle Mexico, entitled: Locura Pastel ‘Cake Madness’

Starring Tehila Rich and Ania Kisiel, the imagery captures a behind the scenes look at the duo while they prep and dye their hair neon pink and lovely lavender.

Unashamedly girly and fun, the models wear looks by D&G, Valentino, Fendi, Elie Saab and Bottega Veneta. From the knee-high stockings in lolly pink to the most delicate lingerie inspired pieces –  from first dye to flawless finish this editorial is simply delicious!

Be inspired & embrace your youthful femininity this Tuesday xx